Migraine & Gluten: Is there a connection? 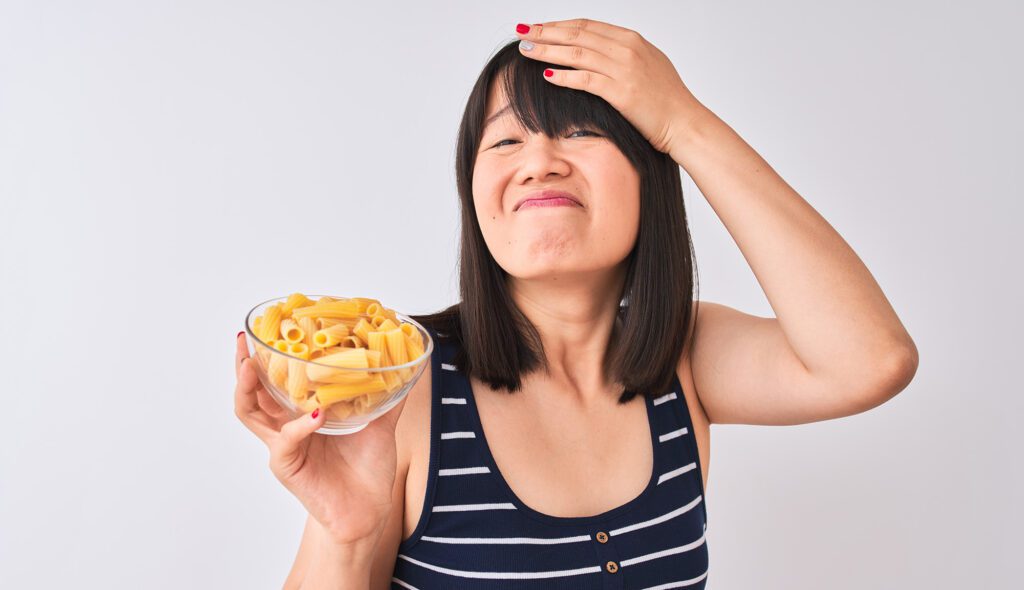 Migraine & Gluten: Is there a connection?

Gluten: a family of proteins found in grains, including wheat, rye, spelt, and barley.

Celiac Disease: an autoimmune condition that can cause damage to the intestines if gluten is not eliminated from the diet.

Gluten sensitivity: may cause digestive symptoms similar to those of celiac disease but does not cause intestinal damage or trigger the production of antibodies to gluten.

I have a lot of patients who ask about gluten and its impact on migraine. There have been various studies examining the relationship between celiac disease, migraine, and the effect of a gluten-free diet. We know that migraine is more prevalent in those with celiac disease and that headache can be an early symptom of the disease. There is also evidence that patients with diagnosed celiac disease that experience migraine and switch to a gluten-free diet tend to have fewer and less severe migraine attacks.

The relationship between migraine and non-celiac gluten sensitivity hasn’t been well established. In one study of children and adults with gluten sensitivity, a significant percentage of patients noted an association with headache. Overall though, there is limited evidence to suggest that a gluten-free diet is beneficial in this population. In my practice, I have seen a handful of patients without celiac disease swear that their headaches improved after cutting out gluten. However, the effect in most seemed to be short-lived and the gluten-free diet was very difficult for them to sustain.

There is a connection between migraine and GI disorders, including celiac diseases. Celiac disease is an autoimmune condition in which gluten triggers the immune system to attack the body leading to damage of the lining of the small intestine. Part of this response involves the release of pro-inflammatory chemicals. Some of these chemicals (especially CGRP) are known migraine triggers. In patients with non-celiac gluten sensitivity, the mechanism isn’t clear. It is possible that gluten triggers some inflammatory gut response in those that are gluten sensitive. However, further research is needed.

If you have migraine, should you get tested for celiac disease? Should you try eliminating gluten from your diet?

I do not routinely test migraine patients for celiac disease or suggest gluten elimination. I do however screen for symptoms of gluten sensitivity and refer for testing if present. Gastrointestinal symptoms can include diarrhea, bulky and foul-smelling stool, stool that floats at the top of the toilet bowl, and excessive gas. Having a strong family history of celiac disease may also prompt me to refer a migraine patient for testing. For confirmed celiac disease, gluten elimination is always recommended.

Non-celiac gluten sensitivity is much trickier as there is a paucity of data on whether a gluten-free diet improves migraine. Given the lack of data plus the potential health and financial ramifications of going gluten-free, I don’t usually recommend it in the absence of celiac disease. Going gluten-free is not necessarily the “healthier” alternative that people like to think it is. Gluten-free products tend to be higher in fat, carbohydrates, and sodium and tend to promote weight gain. They are also lower in fiber, iron, and other important vitamins. Aside from differences in nutritional content, gluten-free products are often higher-priced and may cause a financial burden.

Dietary modification is part of a comprehensive treatment plan for migraine and there are many diet changes that patients can do on their own. However, a gluten-free diet is a serious lifestyle change and is recommended only for those who really need it. Thus, discussing it with your doctor first is important.

Are there other gastrointestinal disorders associated with migraine?

Many people may not be aware that migraine can impact the gastrointestinal system. Celiac disease is one of many GI disorders associated with migraine. Others include irritable bowel syndrome, functional dyspepsia, and gastroparesis (delayed gut emptying). Thus, it is important for patients with migraine to discuss any GI symptoms with their doctor. In many cases, a multi-disciplinary approach to treatment with a neurologist/headache specialist, gastroenterologist, and nutritionist can be very beneficial.

Neuromodulation Options For Migraine Treatment: How Do You Choose?

6 Facts You Need to Know About Migraine